Nearly half (44%) of corporations already use some type of flexible office solutions. That’s according to the Occupier Survey by commercial brokerage firm CBRE. The survey, which covers the leaders of corporate real estate departments for major corporations, shows they expect their usage of flexible office to continue to increase over the next few years. 65% of the companies expect to use coworking as part of their office portfolio in the Americas by 2020. Major brokerage firm JLL predicts that, by 2030, up to 30% of all office space will be, in some form, flexible. Companies cite a variety of reasons for using flexible office, from financial factors to a desire to promote collaboration and innovation.

Corporate real estate departments deploy flexible office solutions in a variety of ways. Microsoft made headlines this year with their decision to give 1/3 of their employees in New York City access to WeWork's locations. Microsoft cited their desire to tap into the startup culture at the coworking spaces. IBM took a different approach. It partnered with coworking operator Galvanize and opened dedicated offices inside their locations. IBM dubbed the spaces the “Bluemix Garage” in a nod to the garages that have been the historic birthplace of many tech companies. The decision was part of an effort to spur innovation at IBM. Google and Amazon have separately opened multiple coworking locations of their own – in an effort to better connect to customers using their platforms.

Over the last several years there has been a steady stream of announcements for new corporate headquarters. Apple, Google, Facebook, Linkedin, GE, SalesForce, American Airlines, and Workday all completed or unveiled plans for new offices. While the new headquarters are garnering much of the attention, the growth of these companies and their appetite for space is also happening far from their home offices. For the majority of these fast growing companies their employees are distributed across multiple offices and regions. More than 50% of their employees work in a region other than their headquarters’ region. The reasons for creating a dispersed workforce range from a desire to be close to key partners to the need to tap into additional talent pools. Company growth in different locations makes flexible office space an ideal expansion solution.

Even large companies entering new markets typically start with relatively small teams. In these situations, shared office space makes sense to keep costs under control and logistics simple. Even as these offices grow, rapid team expansion favors the ability to add space on-demand. Lastly, uncertainty around team growth rates will further push companies to seek out spaces without the traditional 5 or 10 year commitments.

An analysis of publicly available employee counts for Fortune 500 companies showed that nearly 70 of them (14%) were growing their employee base at 10%+ per year. The success of many of these companies has made competition for top employees fierce. Companies are looking to hire more individuals with degrees in Science Technology Engineering and Math (STEM) and often directly following graduation. A review of any of the career pages for these fast growing companies includes a prominent pitch to attract in demand grads. By expanding beyond their home markets companies can tap into potential sources of talent in new markets. These markets give companies exposure to existing pools of talent and the waves of new graduates. Cities with large student populations are a natural target for attracting talent. New York tops the list of cities with the largest population of college students with over 1 million. (see chart) San Francisco is ninth on the list with roughly 280K college students. 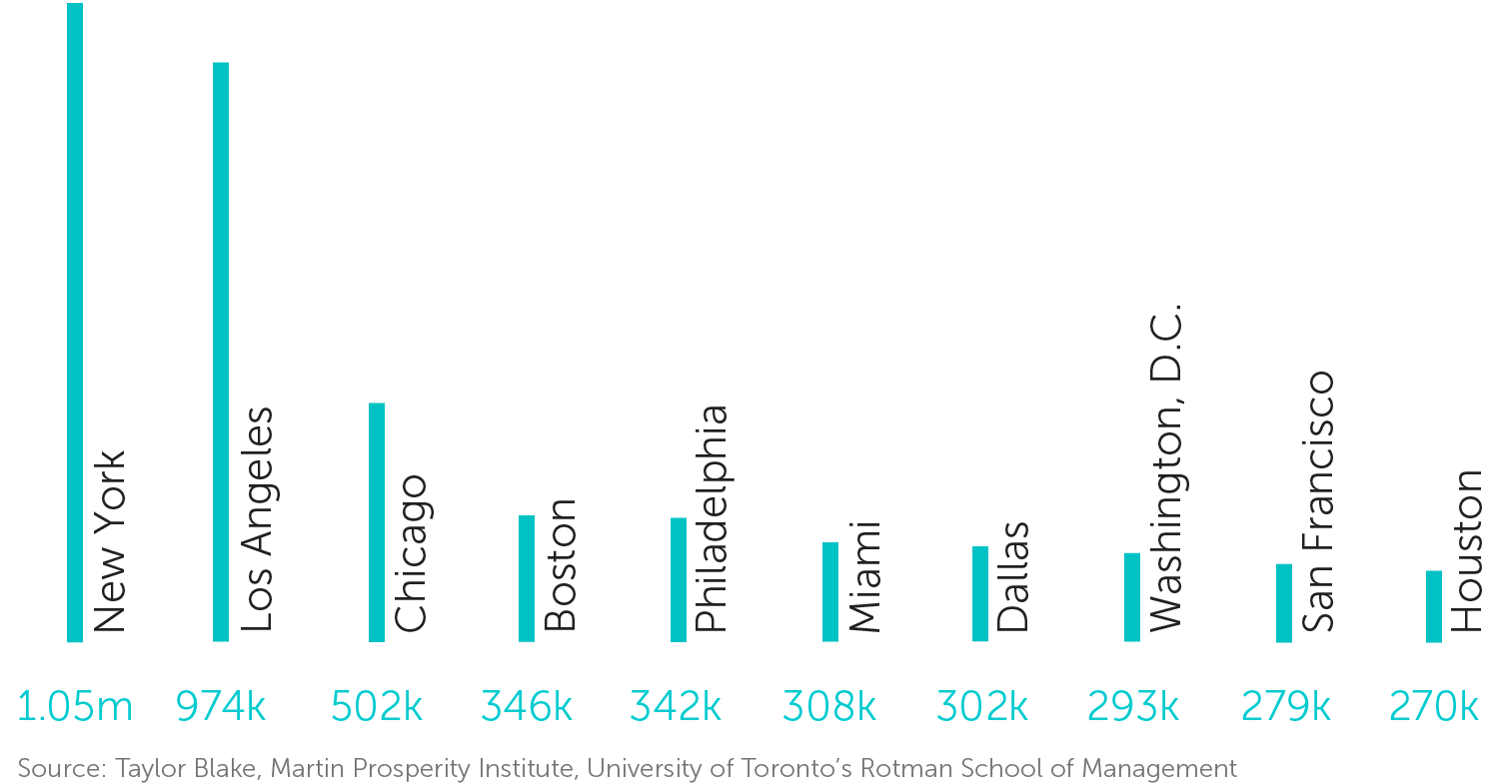 Recent analysis by the Brookings Institute and urban scholar Richard Florida show the high rates at which individuals tend to stay near where they went to college. An examination of the data shows New York third on the list with 74.2% of students staying in or around NYC. Many cities not historically considered to be millennial magnets show high post-graduation retention rates as well. Detroit, Houston, Seattle, Atlanta, Dallas, Portland, and Chicago also retained 70%+ of their graduates.

With students increasingly staying near where they went to school, opening offices in cities with large student populations is an effective strategy to attract these graduates. Companies might find it easier to add jobs to markets where candidates are plentiful rather than entice workers to relocate.

The case for tapping into the talent from more cities doesn't end with recent graduates. A study from The American Institute For Economic Research shows job-related migration between cities has steadily declined in the US over the last 30 years. The rate of migration has fallen to half the rate seen in 1990, with 10 million fewer people moving to a new city per year. The study largely attributes this change to more efficient job markets. Individuals, particularly those with in-demand skills, can now find jobs in the region they live. They don't need to move to a new market to find a new or better-paying position. 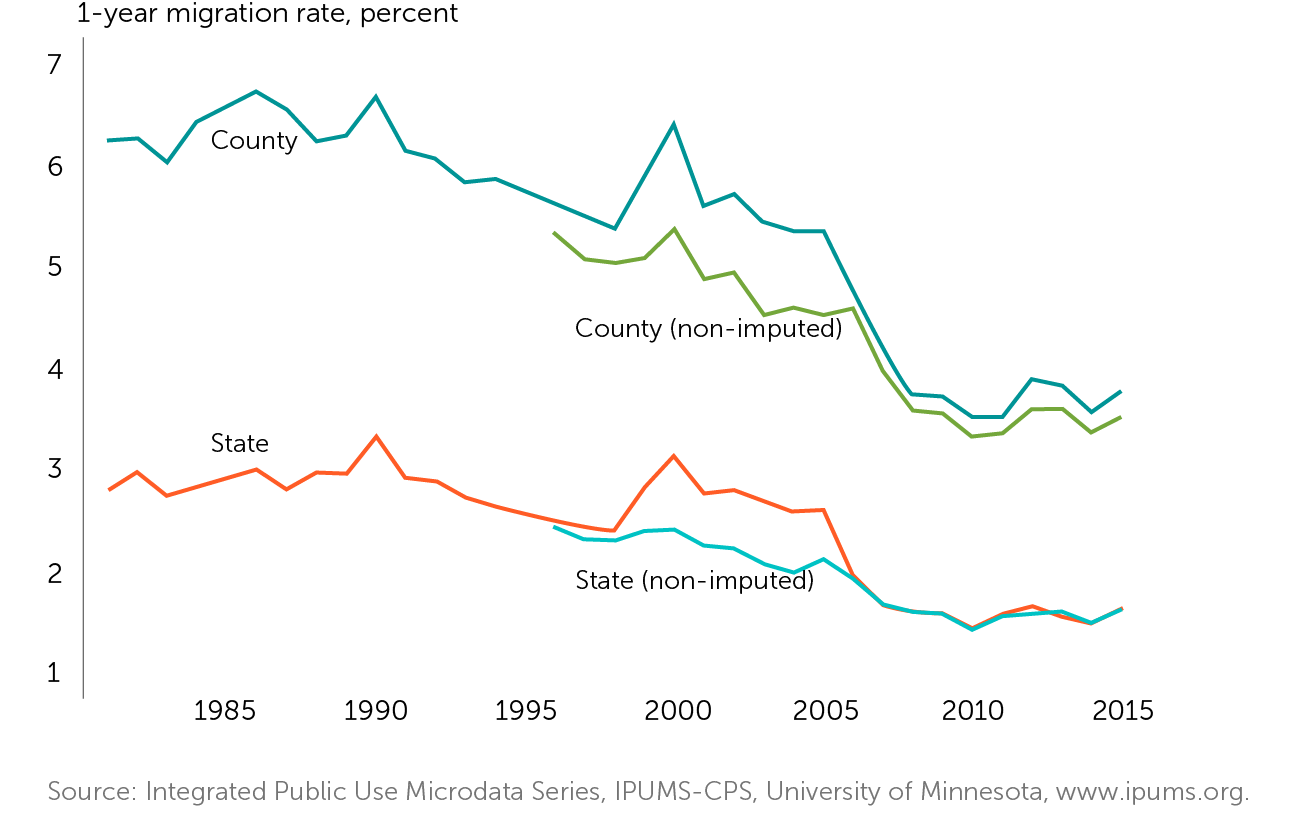 Lastly, many of these markets also offer an opportunity for companies to benefit from varying costs of living in different cities. The cost of living index shows New York City as the most expensive city in the US, with San Francisco not far behind. Several other major cities are a relative bargain. With New York as the benchmark, Boston & LA are 20% cheaper. Similarly, Chicago, Philadelphia, and Miami are 25% less expensive than NYC. While Atlanta, Minneapolis, Pittsburgh, Dallas, Austin, Houston are all around 35% less. Building a workforce in these cities allows companies to reduce employee costs and offer competitive salaries.

Cost of Living Ranking in US Cities 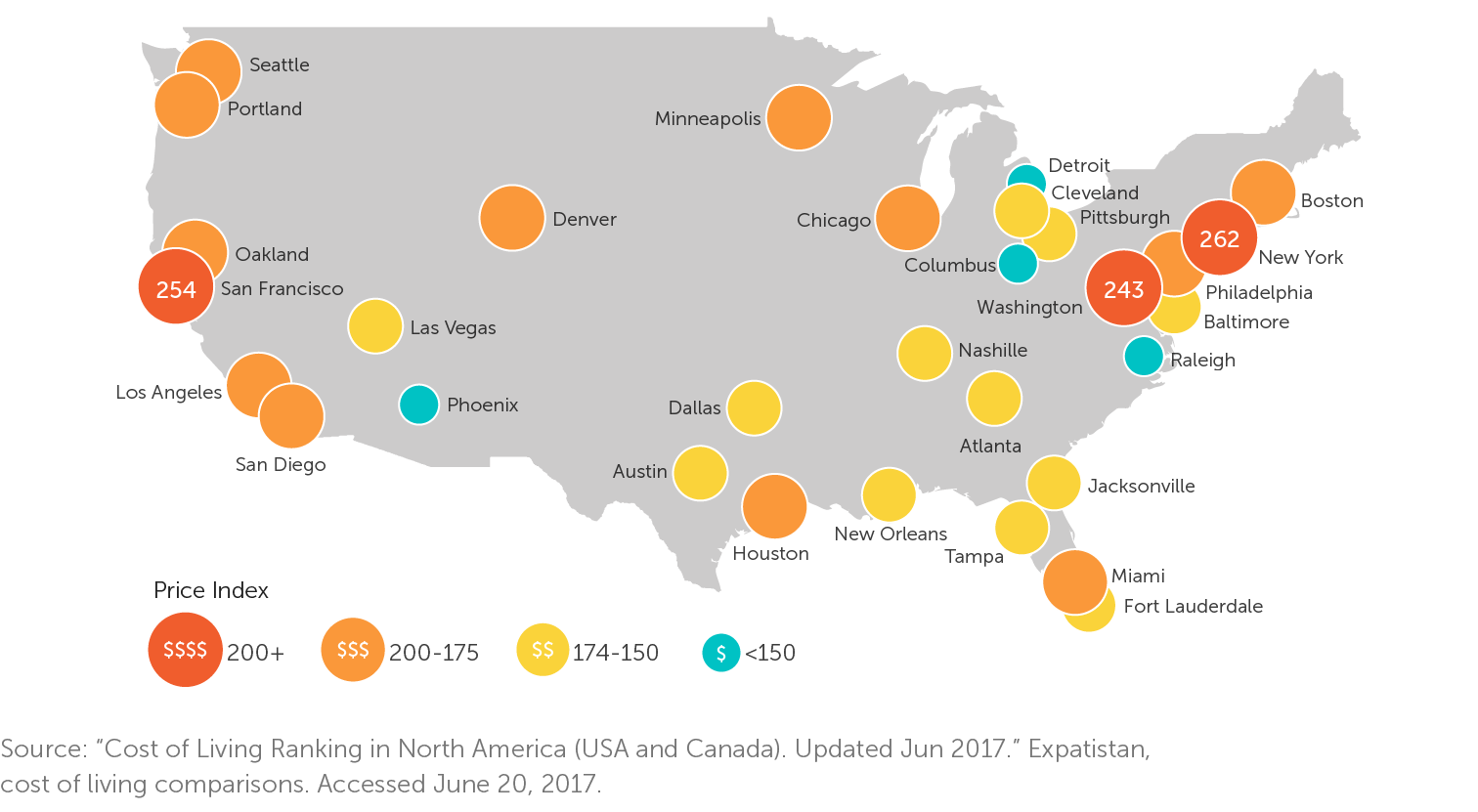 Flexible office presents challenges and opportunities for traditional owners. Historically, the relationship between owners and office tenants has been merely transactional. The most significant engagement between tenant and owner has taken place around the leasing and buildout of space. But this activity might only happen every 5 or 10 years. Owners have not involved themselves much with what took place in the walls of a tenant’s office. An owner’s responsibility focused on delivery of the space and upkeep of the building and systems. Flexible office spaces are part of a larger trend where owners and tenants are engaging more frequently and meaningfully. Tenant are looking for help supporting their day-to-day operations. Landlords are offering more services. These include shared conference rooms, front desk staff, and IT support. The role of the landlord is shifting more toward a hospitality role.

Landlords are choosing to take on this role themselves and expand the services they offer tenants. This is one way to attract more tenants to their properties. Early in 2017, Tishman Speyer introduced Zo, a suite of wellness, lifestyle and corporate services for their tenants. Other major real estate owners are investing in flexible office providers. Blackstone Group announced taking a majority stake in The Office Group, a major flexible office provider in the UK. Lastly flexible office service providers like Industrious are actively looking to partner with office ownership groups as third-party managers of space.

This change for commercial landlords to become more service-oriented mirrors the shift we saw in residential real estate. Over the last decade portions of the residential apartment sector saw increased engagement between tenant and landlord. Residents sought more services and amenities as part of their experiences. Ownership groups, many of which had experience with hotels, emerged to provide these services. The office sector is poised to follow suit.

Average Monthly Rent per Person in US Markets 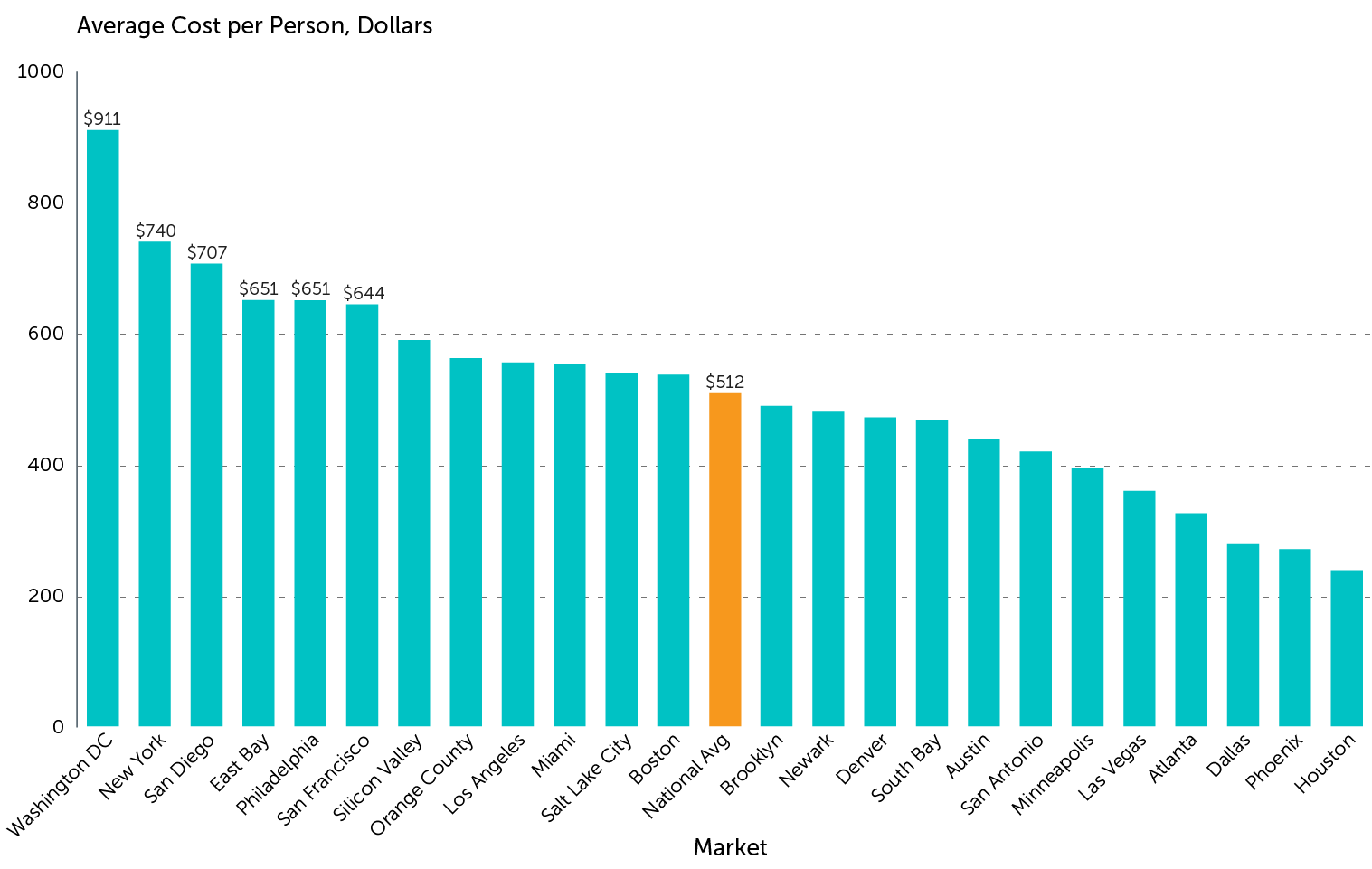 Average Rental Rates are calculated by dividing the asking rental rate by the maximum capacity of each space. When no spaces are available, prices are based on historical averages.